Well all that talk about keeping this going was apparently a load of bullshit, as it’s been an entire year since my last post. I’m just as surprised as you — no, really — because I did a bunch of work on the label and never did anything with it… until NOW!

First off, if you haven’t seen the new tape reviews on Terminal Boredom, why are you here? I have sadly neglected to send out any of these things to any publications and that’s a total failure on my part. Both the Raw Nite and Musk tapes are amazing and you should not only listen to them on our Bandcamp site (this is a link) but them there as well.

Which brings me to my next bit of business — ALL LEMON SESSION RECORDS ARE ON BANDCAMP! Dream come true, right? But if you want to buy digital and physical version of all our releases at Lemonsession.bandcamp.com. Go there now and go crazy if you know what’s good for you.

Finally, I’ve posted some recordings of my solo project Wasted Places on Bandcamp. Please check it out: Wastedplaces.bandcamp.com. It’s what I’ve been doing with the little free time I have (instead of running a label, obviously.) 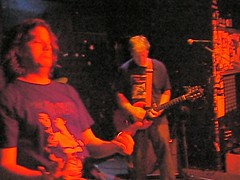 As if life wanted to send me a message it knew I would ignore, I’m sad to report that my recording equipment has blown up.

My 16-track set up bit the dust during the Friday night of Budget Rock 10, so not only am I temporarily unable to use it, the last bands I attempted to record with it were Personal & the Pizzas, the re-united Statics, and the almighty Rip Offs, who played one of the most amazing sets I’ve ever witnessed. Yet none of what I captured will ever see the light of day because it all sounds like complete shit, and not the good kind (AKA “lo-fi”), but digital garbage.

It looks my equipment is repairable but it’s going to take awhile and require money I don’t have, now that I have a baby on the way as well as two new releases out Lemon Session (Von Zippers and Zulus). So, if you’ve been holding out on buying records from me but come to this site for the free downloads, please consider buying some records. You won’t be sorry if you do since they’re all rad.

Now onto what this post was supposed to be about: my recent recordings (pre-blow up) of Raw Nite.

END_OF_DOCUMENT_TOKEN_TO_BE_REPLACED

Slowly but surely, this empire will grow

Finally, all the free records I’ve been sending out to radio stations, publications and other label owners have paid off (sort-of): Lemon Session has made quite a media splash.

A quick Google search show the label name popping up in radio playlists all over the nation, including KDVS (Davis, CA), WUSB (Stony Brook, NY) and KEXP (Seattle, WA). One DJ named Jared who has a show called “What We Do Is Secret” (Tuesdays from 10:30 p.m. to 1 a.m. on KRCL in Salt Lake City, UT) even wrote a great article about the first four releases on the club.

END_OF_DOCUMENT_TOKEN_TO_BE_REPLACED

I can scream REALLY loud. (I also love Devo.)

So this post is a little late and a little rushed because I leave for the Dry-Shitties tomorrow. Still, I finally finished these goddamn demos and everybody should download them, distribute them, do whatever. They’re just demos, right?

But before I get to the songs, I have to show off/brag about my newly obtained Mark Mothersbaugh autograph. My wife’s aunt came over from Philadelphia to visit my in-laws for a few weeks and brought me a present — no, not the autograph, but a Men Without Hats “Safety Dance” 45.

END_OF_DOCUMENT_TOKEN_TO_BE_REPLACED

This, right here, is one of the reasons I started this blog. When I first thought this thing up, I would tell myself, “…and I’ll get to post about Pud!” Really; it was one of those things I just daydreamed about.

When talking about Bainbridge Island punk rock bands, the locals would think it more prudent to talk about bands like the Rickets or March of Crimes. But seriously, fuck them; I want to talk about Pud.

About the end of 1994, I was told by some school friends of mine that the Rickets were breaking up and were planning a “last show.” in Seattle.

END_OF_DOCUMENT_TOKEN_TO_BE_REPLACED

The first in a series of posts featuring buried treasures from the mid ’90s that prove, once and for all, that Bainbridge Island is full of ridiculous people.

Yesterday, after a run to Amoeba, I checked off another entry from my list of records I must own before I die. For a whole $2, I finally purchased the Cleavers’s “Livin For Leisure” 7″, a record I’ve been looking for since it was released in 1995. Oh happy day!

“Who are the Cleavers?” you ask. Well, does the name “Murder City Devils” ring a bell?

While the majority of what-would-become-the-Devils lived in Seattle and played feedback-drenched, double-screamer hardcore in the band Area 51; across the Puget Sound, in a little place called Bainbridge Island, Devils-to-be Nate Manny and Gabe Kerbrat* both played guitar and sang in a band called the Cleavers. (Other dudes that went by the name Joe and Oliver played bass and drums respectively.) Best described as “immature punk,” (though I bet they had a funnier/stupider name for it,) the band sang about the awesomeness of Abe Lincoln, failed attempts at escaping Alcatraz, and, most notably, what they would do if they were robots.