Can you die from exhaustion? 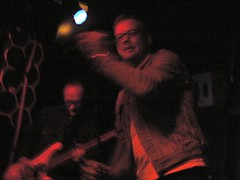 It’s stupid how long it’s taken me to finally post this. A month ago I was so busy that I had to wait until I took a vacation to get back to this blog. But then after I mixed the tracks and wrote the majority of the post, I basically forgot to publish it for two weeks. It was dumb – I’d remember it early in my day, usually when I was nowhere near a computer; and then by the time I could’ve finished the post, I’d drink a bunch of beers and watch several episodes of “Storage Wars” instead.

Though work has sucked up the majority of my time and energy, label stuff has also been a part of why I’ve been so busy – mixing recordings for possible releases, getting everything squared away with the next two singles and even buying more equipment for live recording. So expect more content, both free and for purchase.

But I could be just wasting time and money as my wife is pregnant and according to every father I know, I won’t have a life after the baby arrives. Well, I guess it’s just trading one dream for another… But if you’re in the Bay Area and want to see how the record business works for little money, email me.

Let’s get to what you actually care about: free music.

Little Queenie is an Bay Area all-star punk band featuring members of the Gris Gris, Spencey Dude and the Doodles, Battleship, and many others that I don’t have the energy to type out. Their names should be familiar to those who like good music — bassist Oscar Michel, bassist Gene “Bean” Bae, drummer Joe Haener, and singer Mark “Icki” Murrmann, the photographer/label head/ex-MRR co-editor who doesn’t have as many releases under his belt as teammates but isn’t a new comer to mic rockin’ (check out his work as frontman for Short Eyes (with Bean on guitar), who have an CDR on Raw Deluxe records.)

The most notable part of this band is that the role usually reserved for a 6-string guitar is filled by a second bass, be it a distorted, rock-guitar-like bass (played by Michel.) The switch results in a new take on the neo-proto punk 4-piece and nothing like Cop Shoot Cop.

*Quick note — These songs were mixed in a Portland hotel room while my wife slept and a Storage Wars marathon played on the TV.