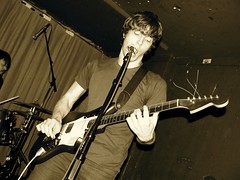 The days of Percocets and popsicles are over. After two weeks of sitting around my house in sweatpants, pulling inch-long chunks of dried blood from my nose, I am back to sitting on my computer all day, pretending I’m a recording “professional.” Hopefully all the pain and sacrifice will mean better sleep, as the procedures I underwent were solutions to my horrible sleep apnea (now you don’t have to ask “what did you get done?”)

I’ll be at the SS Records 10th Anniversary shows this weekend if you wanna say “hi” or make arrangements to buy some records and not have to pay for shipping. I’ll be the bald guy with a spotty blonde beard doing nerdy crap like taking pictures or annoying the guys from the A-Frames.

This week’s recording is from a young band of punk rockers from Memphis known as Cheap Time. If you haven’t picked up their albums on In The Red, get the hell off this site right now.

I was pretty excited about this set: though I’m not a Cheap Time superfan/completist or whatever, songwriter Jeffrey Novak impresses the hell out of me. He’s not only a prolific songwriter who rarely pens a “miss,” he tries out different genres and influences, and nails that sound he’s so obviously going for, every time.

I’m sad to say I was unable to catch the band’s encore that night at the Hemlock back in March. As you can hear, the band was smoking that night and sadly my hard drive was maxed out by the time they took the stage again.

Still, enjoy, and keep coming back. Also, buy a record for fuck’s sake!