Your records are on their way 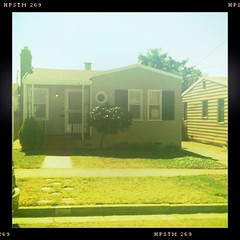 I’m a lucky man. I can say that now, not just because I recently bought a house, but because a riot hasn’t started yet over the fact that I’ve been dragging on this month’s singles club records. For those who subscribed to plan #1, your record is on its way — it’s Aluminum Knot Eye’s entry, which features “Same Old Greasetrap,” the most downloaded song on the Lemon Session Sampler (available here.)

As for the Steeples 7", it’s been delayed — it needs to be re-plated, which will hopefully happen soon. I’ll probably be sending off the Blowtops record before the Steeples stuff is ready to go.

I should add that around the same time I bought the house, I was promoted at work, which means more money to sink into this label! Nothing like blowing thousands of dollars on thousands of records that will probably end up sitting in my moldy attic for the next 20 years — that is, until I chuck them into a landfill to triple their worth. (The ol’ “Man’s Ruin” scheme….)

And yes, I know I probably should be waiting until AFTER the rest of the singles club and Bundle of Fags singles are out to be talking about even newer stuff in the queue, but hey, I actually have the tracks and so I’m going to let my mouth start writing checks.

Though I don’t know exactly WHEN, here’s what to expect from Lemon Session:

Von Zippers: It’s been quite a few years since anything has been heard from Calgary’s greatest garage rockers the Von Zippers, and that’s their fault — not only does the band refuse to tour, they insist on not having a web presence. Their Myspace page? Created by a fan with no input from the band.

Now equipped with their own studio, the band spent the past few years laying down 20 of their favorite covers with no idea who would be putting it out. Luckily, I know a guy who knows a guy, and it looks like the band will be calling Lemon Session their new home.

Hobocop: Hobocop has to be Oakland’s best kept secret. I don’t know how a band could have released such an amazing CDR and be passed up by labels for more than a year. The trio is practically a Bay Area supergroup, having been made up of members from Uzi Rash and Shannon and the Clams, and yet Lemon Session is going to put out their first record a year after the CDR’s release. It might include some of the stuff from the CDR, but it will mostly consist of unreleased recordings (and I promise to release as much as their stuff as I possibly can.)

Sadly, the band is basically disbanding because singer/guitarist Owen Cook is moving to New York. Luckily, the band has tons of recordings and there’s even talk of scheduling more in the future.

Below is a bunch of songs for free download, including tracks from the upcoming Unnatural Helpers, Rib Cages, and Von Zippers records, as well as the Hobocop CDR. Enjoy.

So, in response to the notes I recently received asking about why certain records hadn’t shown up on his/her doorstep and to address them all at one time — they’re on the way. REALLY. I’m sorry, but I promise that these few moments waiting for your records are worth it.